This Vegan Bolognese Sauce is the perfect Italian-inspired sauce to eat atop your favorite noodles. And because this recipe is vegan, compared to regular Bolognese sauce, it takes a fraction of the time to make.

This vegan Bolognese recipe is packed with flavor! Its tomato sauce and red wine base are perfectly complemented by garlic, paprika, and oregano—a quintessential Italian spice combo.

And it definitely pays to be vegan with this recipe because it only takes 30 minutes to make! Regular Bolognese sauce can take hours, but this vegan recipe uses textured soy protein, which is ready in a jiffy!

This vegan Bolognese recipe is…

How to Make Vegan Bolognese Sauce

Scroll down for the full recipe with measurements and detailed instructions.

Who doesn’t love a picture-worthy meal? Beautiful and delicious!

Top your noodles and vegan Bolognese sauce with halved cherry tomatoes and fresh basil. If you have some extra time, you can make some vegan parmesan to top it off.

Try It With Veggie Noodles

While egg and flour noodles will work great with this vegan Bolognese sauce, you can also try it with veggie noodles. You can buy these at the store or grab your spiralizer and make your own.

Try this sauce with noodles made from zucchini, summer squash, sweet potatoes, carrots, or beets.

How long should you simmer Bolognese?

Though other recipes for Bolognese take far longer because of the meat, this vegan version is much quicker because the soy protein is cooked separately.

Can you overcook Bolognese?

Nope! You can’t overcook Bolognese. Just keep it hydrated so as it doesn’t burn on the bottom of the pan. If it’s looking like the liquid level is getting low while you’re simmering the sauce, add some more liquid.

Do you simmer Bolognese with lid on or off?

For vegan Bolognese, you’re totally fine to simmer the sauce with the lid on. This will speed up the cooking time and works just as well as simmering it with the lid off.

Why is my Bolognese sauce watery?

If your Bolognese sauce is too watery, you may just need to simmer it for longer. To thicken it up, you might also try adding something more solid like more diced tomatoes that will soften and thicken the sauce. 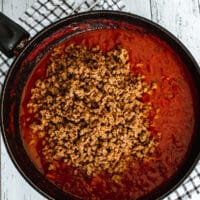