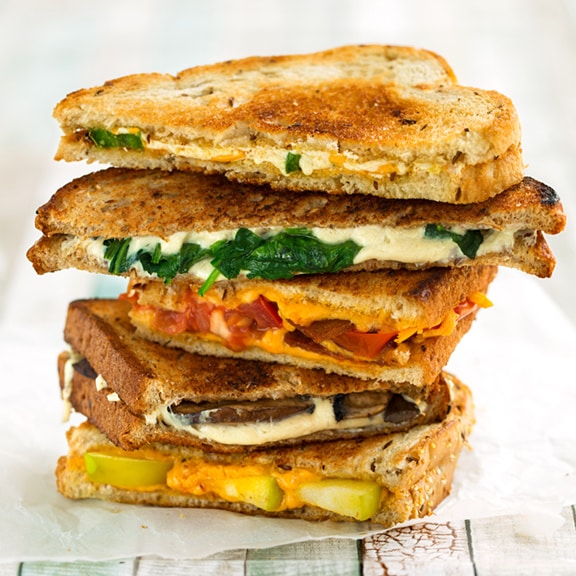 There’s nothing quite as comforting as a hot, gooey grilled cheese sandwich. And now the plant based crowd doesn’t need to miss out with these easy and delicious vegan grilled cheese recipes!

All photos by Hannah Kaminsky.

These days, grilled cheese is hot. (Pun intended.) There are even restaurants devoted solely to them. So why should us vegans miss out?

So today we have five delicious ways to make a vegan grilled cheese – and most can be made in just a few minutes.

There’s no big secret here. We’re not going to hand-craft our cheese or anything like that. Just simple, delicious, easy vegan grilled cheese.

Now there is a misconception out there than vegan cheeses are un-meltable. Not so! I’ve impressed many guests with how melty and stretchy a good vegan cheese made for that purpose can be.

There are several good vegan cheeses on the market melt wonderfully well, including Daiya and Follow Your Heart. You may know of other brands, and if so, comment below and let us know which ones you like!

And of course, nothing pairs with grilled cheese like a bowl of tomato soup. I like to dunk my sandwich! If you want some in a hurry, this Imagine Creamy Tomato is vegan and very good. Or make your own homemade vegan tomato soup.

How to Make Vegan Grilled Cheese

Kids, you don’t need a recipe to make a grilled cheese sandwich, though the internet seems to think otherwise.

You just need some sturdy whole-grain bread, vegan cheese, your add-ins of choice, vegan butter (like Earth Balance), and a good nonstick pan or griddle.

Best to cook over medium heat with a generous but not ridiculous layer of vegan butter; cover the pan when cooking the first side so that the cheese will melt; when the underside is golden, flip and cook the other side. That’s it!

First up is this swoon-worthy vegan grilled cheese, tomato, and vegan bacon sandwich. Use your favorite kind of purchased or homemade vegan bacon.

This is good with either cheddar, mozzarella, or pepper jack style cheese.

Grilled cheese with mushrooms, yum! To make this delightful sandwich, simply precook sliced brown mushrooms (cremini- or for a fancier feast, shiitake) until wilted, then drain.

Layer on the bread: cheese shreds, cooked mushrooms, more cheese shreds, another slice of bread. Cook on a little vegan butter over medium heat, covered, until both sides are golden.

We think this is best with mozzarella style cheese, but you may beg to differ.

Apple and cheddar is a classic flavor combo, and it works quite well in vegan grilled cheese, too. Using a tart granny smith apple is a good move, but if all you’ve got is a red apple, that’s not a bad choice. Either way, just make sure the apple is nice and crisp.

Layer on bread: cheese shreds, apple slices, more cheese shreds, another slice of bread. Cook on a little vegan butter over medium heat, covered, until both sides are golden.

Spice things up with fresh jalapeño in your grilled cheese! Slice it thinly and remove the seeds. Use the usual precautions when handling hot chili peppers.

Layer on bread: cheese shreds, sliced jalapeños, more cheese shreds, another slice of bread. Cook on a little vegan butter over medium heat, covered, until both sides are golden.

We used a combination of cheddar and mozzarella-style vegan cheese shreds with this one.

Last but not least, a vegan grilled cheese sandwich with the green goodness of spinach. Rinse some baby spinach and wilt it in the pan you’ll be using. Transfer to a colander and squeeze out the liquid.

Layer on bread: cheese shreds, wilted spinach more cheese shreds, another slice of bread. Cook on a little vegan butter over medium heat, covered, until both sides are golden.

We used mozzarella-style vegan cheese shreds here, but this would go with any variety — cheddar, or if you’d like a spicy kick to go with the spinach, pepperjack.

This post was originally published in 2018. It has since been updated.